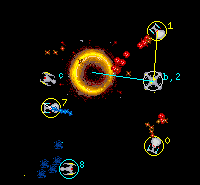 You should not be afraid to admit that you screwed up. Trust us, everyone else knows you did.

Or, what's all this "server type" stuff?

Netrek has a long development history, the longest of any Internet based game. Lots of ideas have been tried, and many discarded. Several variants remain viable.

In addition to the variants of Netrek being played as described above, there is also the important distinction of Pick-up, Clue, and Established Team games.

This page is about types of servers and the games they host; there is also a page that discusses specific server machines you might play on.