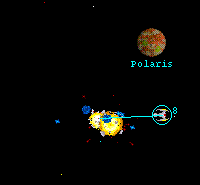 Killing an opponent with a buddy is easier then doing it on your own.

Users Guide to the INL Server

This help file is intended to give the reader everything he/she needs to know about playing timed games on INL type servers. The reader is assumed to be familiar with play on an ordinary pickup server, I describe only the differences here. I've attempted to give both general information and some of the subtle quirks that might be relevant. I've assumed standard INL server version 4.08 here; the INL robot version of bronco servers may have some differences.

I. Connecting to INL servers

INL servers usually accept connections on 4 different ports: a player port and an observer port for each team, home and away. The first 8 players to connect to a given player port join the game on that team (home or away); any additional connections are placed on a wait queue (exactly like a pickup WQ, except here the two teams have separate queues). Anyone connecting to an observer port becomes an observer of that team (exactly like observers in pickup, but you're forced to one team). Only 4 observer slots are supported; the first 4 connections to either observer port become observers, any additional connections are refused with the error message "Sorry, you cannot play xtrek now. Try again later."

(Some server configurations can support more players and observers, but at this time 8 players per team and 4 observers total is the default.)

This example shows the default INL ports: 4566 for the home players, 4000 for home observers, 4577 for away players, 5000 for away observers. The ports can be reset to different values by the server god.

To connect with a client called "netrek", use a command like
netrek -h continuum.real-time.com -p 4566
to specify the host and port. If you leave off the port # option, the client defaults to port 2592 (the standard for pickup servers).

A list of public INL servers is kept at the INL web page.

In between actual games, the server runs in a chaos mode where players can shoot at the other team and get infinite bases (useful for warmup). If you'd rather not get hunted down, there's a captain's command called "confine" which creates a box around each teams' space to keep enemies out. When the server first comes up, the home team is fed and the away team rom. Everyone can see all planets in order to pick races. Bombing is disabled, but you can take planets by beaming enough armies. This hides the planet from the enemy, which can be annoying if they want to know what it's resources are.

INL servers use a special resource distribution which is duplicated on many pickup servers. The formula is: the home planet is fuel/repair. To the other 4 core planets are randomly distributed one agri, one repair, and two fuel resources (completely uncorrelated). An agri is placed on one of the outer 4 planets excluding the corner, it's adjacent planet is fuel. The other three planets randomly get 2 fuel and one repair (again uncorrelated).

The actual game begins when the captains of each team send start commands. The race of each team is chosen by the captain before the game. When both captains send start, everyone blows up and is forced to join their new team. After a 60 second interlude, everyone blows up again and the game is on! The initial armies per planet is set by the captains (default=17), all enemy planets are hidden, and all player stats are reset to zero.

The length of the game is also set by the captains (default=90 minutes of regulation time, 30 minutes of overtime). The server sends to ALL a message announcing the time left at regular intervals (you can get the exact time left with the 'time' command, see below). The actual game tends to take somewhat longer, since captains can pause the game to handle connection problems or call timeouts. When the game is paused enemy ships disappear, enemy shots are hidden, all objects stop moving, and planets do not grow armies, but players can still send messages as usual. When your ship suddenly stops moving, check the ALL board to see if a pause was called.

The only differences between the actual play on an INL server as opposed to a standard vanilla server is that everyone advances in rank at the guest rate (5x normal) and the rank for an SB is set to Ensign (so you can get a base immediately). Note that the SB rebuild time of 30 minutes still applies; losing your base at the wrong time can be unpleasant.

If neither team has a victory at the end of regulation, the game goes to a sudden death overtime. The game continues unchanged, except that everyone has no kills and is now at their homeworld. Any armies on ships at the end of regulation are placed on the homeworld (or some available planet, if the homeworld isn't yours). The first team to satisfy the victory conditions at any moment wins instantly. If there is still no winner at the end of overtime, the game ends in a tie. (Exception: if the server was compiled with playoff mode enabled, then there are no ties: additional overtime periods occur with the winning conditions steadily becoming easier. In practice, in INL playoff games the overtime length is simply set to 9999 or something, and someone wins eventually).

Note that, except for genocide, you must own 11 planets to win; 10 planets + 3 neutrals isn't enough. The standard OT win is to take one enemy planet and neutralize another, but more exotic configurations are possible.

Any message you send to yourself is interpreted as a server command. Most valid commands are for use by captains to control the server (see the captain's commands section below), but some can be used by all players.

When the game starts, the server sometimes gets confused and lets a ninth player in on some team (he takes a normal observer slot, but is a real player). If this happens, just quit out.

All sorts of other bad foo can happen at game start, the server occasionally crashes or people get ghostbusted. The least confusing scenario is if everyone is alive when the server wants to kill them, and no one connects to the server while it's moving people around. Do not taunt happy fun server.

Some servers have a bug with the ignore feature: if someone you're ignoring sends you a message, you ghostbust. Beware.

The ? command sent to someone gives, among other stats, their non-base hours. This means after your first base dies, his hours tell you how long ago it was and thus when the next base will be available. There is no sbtimer command as on newer bronco servers.

uncaptain If you're captain, stop being captain.

commands for starting up a game:

fed/rom/kli/ori/pass These commands allow you to choose what team you want to be. The away team gets first pick; they can select a race or pass first pick to the home team. After the away team makes a choice, the home team can choose (but only an adjacent race, if applicable, and can never pass). If the away team had passed, then they get their choice. You can change your choice as many times as you want up until the opposing team makes their choice (sending pass a second time reclaims first race pick).

gametime x y (2) Requests a game length of x minutes of regulation and y minutes of overtime. Minimum 1 minute for each. Set when both captains have sent the same request (this is true for all (2) commands).

newgalaxy (2) Requests that a new galaxy be built. This returns all planets to their proper owners and redetermines their resources. This command does not reset any race choices previously made. Also used to start a new game after the end of another.

register (2) request that the stats be emailed to the INL statboy. Only used for official INL games.

start (2) request that the game start.

To start a game, each captain must pick a race, set a team name, and send start.

commands during the game:

timeout Toggles request for a timeout (like in football/basketball). The timeout happens after 5 minutes have passed, when the server otherwise becomes paused, or when all ships are a certain minimum distance away from enemy ships. This distance starts at the yellow alert distance and decreases linearly to zero over the 5 minutes (this was designed to minimize the disruption of the game). The default is one timeout of 5 minutes per team. The server sends the message "Game is paused." at the start and each minute thereafter.

pausenow Exactly like pause, but doesn't require both captains; intended for when one team is completely busted and can't pause. Note that INL rules cover the acceptable use of both pause and pausenow for official INL games.

continue (2) resumes play from a pause or timeout. A continue is automatically imposed when a timeout expires, or 20 minutes after a pause is initiated. A 10 second countdown to the ALL board precedes the restarting of play.

restart (2) requests that the game be terminated immediately. This is only relevant within a current game. This should be followed by newgalaxy to start the next game (also use newgalaxy, not restart, when the previous game ended normally).

free x If slot x is currently dead, then the server disconnects that person's connection opening the slot for the next person on the queue. Intended to get rid of ghostbusted players so that a sub from the queue can enter. This won't work if the ghostbusted player isn't dead; kill him first. This can be used to kick out people on your team that you don't like, but that's highly antisocial. Example: Fb->Fb free 4

confine Toggles confine mode, which is enabled if either captain has requested it (only during the warmup time). Puts a square barrier around each space at about the frontline planets that prevents enemy ships from passing through. Ships inside the barrier are teleported back outside. It is possible to lock a server by becoming captain, setting confine, and orbiting a fuel planet cloaked. Obnoxious with a capital O.

restrict cmd Toggle allowing command cmd to be used by anyone, or captain only. Almost never used.