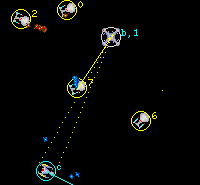 The team that delivers the most armies wins.

An inter-collegiate Netrek "All-Stars" game was played in November of 1991 between people at Carnagie Mellon University and the University of California at Berkeley. In February of 1992, league play started with a league of 13 teams.

Netrek was almost certainly the first Internet game to have league play, and at one time or another had leagues not only for Vanilla/Bronco style Netrek, but for two of the other variants as well. Leagues ranged in size from two to at least fourteen teams. Teams sometimes had several members who worked or went to school together so that they could be in the same room during a game.

As of 2007, there are no active Netrek leagues. Team play has just been restarted, with two teams having formed and played their first games against each other and against the world.

The following leagues have existed in the past:

The INL had their first games in February of 1992, and played two or three seasons per year through 2002 (ending with the "Fall/Winter 2002 season", scheduled to run from December 2002 through April of 2003). Most INL players were from the United States and Canada, though there were certainly a number of European players and others as well.

A semi-annual (two seasons per year) league dedicated to (and tolerant of) newer players who have little or no league experience. 2002 was the most recent year of Draft League play. The Draft League home page is still up.

The WNL was a league that tried to blend the best of the INL and the DL, and teams from both other leagues were welcome to play in WNL games. The WNL played four seasons, Fall 2000 through Spring 2002, before merging with the INL. The WNL Home Page is mostly inoperable, but display of the the old game statistics may be repaired at some point.

The ENL was the European-oriented counterpart to the INL. There were no restrictions preventing non-Europeans from playing in the ENL and Europeans from playing in the INL; some players participated in both leagues. The league existed primarily because for most of the 1990s, trans-continental Internet connections were quite bad, discouraging European players from playing in the INL because their server lag impeded their play. The league folded in the Summer of 1999, by which team the player base had somewhat eroded, and network performance was less of an issue. The old ENL Home Page is currently inoperable.

The INHL was a league dedicated to Netrek Hockey. They played their most recent season in 1998. Home page at http://www.inl.org/inhl/.

Paradise is a different flavor of Netrek that is not, as of 2007, actively played. There was a Paradise league, whose last season was played around 1995. For more info about Paradise, see the Paradise Netrek Home Page