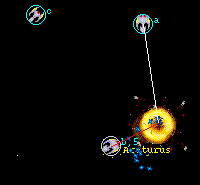 It's dangerous to underestimate opponents or overestimate teammates.

The Netrek Cinema contains collections of Netrek game snapshots and recordings submitted by various players over the years. If you would like to submit your own recordings, please let me know.

Adrian Moore submitted his Netrek Take File page to the Netrek cinema. The Take Files contain a lot of cool animated GIFs that show how to play the game. Check out the Take File or the mirror in Europe.

Theo Tonchev wrote a Java client to allow observing, recording, and playback of Netrek games. A new Java client, called JTrek, was written by Robert Temple, possibly based on Theo's original work. Take a look at the JTrek client.

These MPEGs were created by Steve Samorodin (Sven, da Swedish Chef) during the Spring 1995 season. Descriptions quoted from *SMACK!* Pack's homepage. Don't you love the melodrama!

These snapshots were taken by Tom Holub (Mojo Riser) using a beta 256 color Paradise client. He has kindly made them available to the Cinema for your entertainment. Just watch him rewl over (and get rewled by? :) his enemies...

Woah!!! Check out some serious action! You can find partial or entire game session recordings below.
These movies use the Paradise client's "Record Game" feature, so you'll need a Paradise client to view the game. Simply download the client for your architecture, download the game recording (ending with a ".prec"), then watch the show by invoking the client with the "-F " flag, e.g. "paradise -F mygame.prec".

The following game recordings were made with XSG. If you are not familiar with XSG, please do not download these files. Each of these files range in size from 12MB to 40MB. \n"; echo getFooter(); ?>